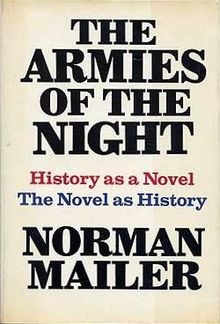 In Norman Mailer’s 1968 nonfiction novel Armies of the Night, he recounts the tale of his arrest – probably fictionalised in parts, but interesting nonetheless.  The novel chronicles the previous year’s 100,000 man March on the Pentagon, a fierce and fervent protest in response to the atrocities of the American government in Vietnam. An exemplar of that period’s righteous indignation and political dissidence, it led to the arrest of several public figures on criminal charges for what you and I would call appropriate civil disobedience. Among the more unexpected offenders (perhaps) and the star of our vignette is the “slim, sharp featured man with an ascetic expression and an air of gentle but absolute moral integrity”, with whom Mailer finds himself sharing a cell. 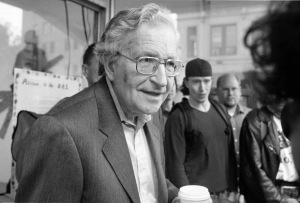 The figure described is MIT linguistics professor Noam Chomsky, so that “perhaps” is perhaps not a parenthesis to skip over, since his involvement in illegal anti-war activity is hardly a well-guarded secret. Chomsky showed a genuine disdain for the passive and often unsubstantiated bickering of academics in the face of serious moral issues, recognising that as ivory tower inhabitants they are in a unique and privileged position, “to acquire the training… to seek the truth lying hidden behind the veil of distortion and misrepresentation… through which the events of current history are presented to us”. The “responsibility of intellectuals”, he writes, is greater than the “responsibility of the people” proportionate to the degree of this privilege, and must extend beyond the comfortable and often self-serving circles of academia from which it unwittingly grows. To put it simply, if all the bright young minds in the universities are busy attaching ‘-izations’ to pre-existing words and debating over seemingly impenetrable social theory,  who’s going to help us clear up and act on the actual moral issues?

I was reminded of the spirit of these points by a University of Bristol Question Time discussion on gender I went to last week. It was actually pretty good, in part just because it reassured me (along with a lot of others in the room, I think) that the people who have been responsible for the recent surge of zealous feminist article posting, blog writing and sometimes quite hot tempered debate online actually exist in the real world and aren’t just Twitter automata. I say this with almost complete sincerity since – at least among some of my friends – these topics are barely breached. Someone at the Question Time made a similar point actually, admitting she was well aware that sheoften remained within quite insular, sectarian feminist discussion groups online but that this was usually just by way of a therapeutic reminder that other people are having similar thoughts; it’s a kind of Inception spinning-top gauge of sanity.

Here’s a problem: one disconcerting aspect of the internet age is that we’ve suddenly become pretty bad at estimating where certain types of power lie. This is probably because we lack a good understanding of the nature of the complex vectors through which information now flows (we weren’t very good at it anyway). On the one hand the internet engenders a great deal of freedom. It’s a tool we have much more control over than TV, which soon runs out of three digit number combinations to play with. On the other hand, it’s pretty clear that all sorts of other filters – some intentional, others quite accidental – play a role in channelling our cyber excursions (it’s by no means a coincidence that however many dozen of your friends ‘like’ the same video). This means that sometimes you find yourself in a nice little crevice of the web with like-minded people who are all under the soft, fuzzy illusion that everyone else is there too. When one of these precarious, wobbling bubbles burst – as one did for me when I realised my housemate hadn’t even seen an increase in feminist interest online at all in the past few months – it’s worth asking a few probing questions. 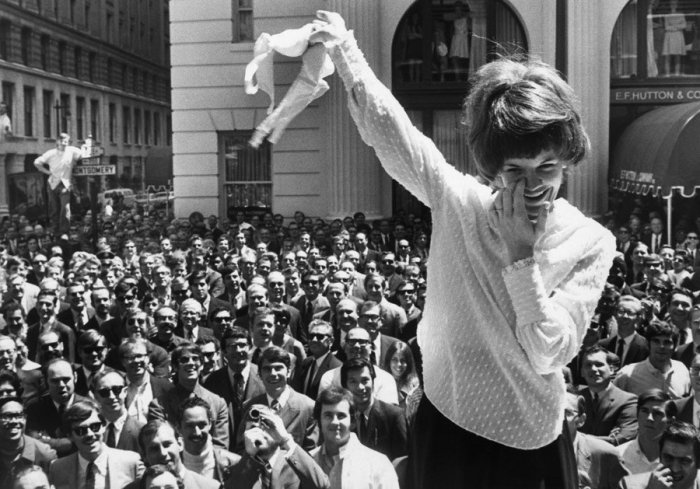 One question might be this: since the primary goal of feminism must be to actually impact the lives of real women in a positive way, is the kind of sectarian distinction-drawing and highly theoretical conjecturing that some people spend energy on actually helpful? Unfortunately, it seems that only narrow, marginal circles talk about the issue in a serious and constructive fashion. I was disappointed during the Question Time session at how regularly interesting and passionate debate turned into sociological theorising couched in technical vocabulary. Maybe I’m wrong here, maybe there are areas of discussion where we have to be particularly careful about the language we use if we want to make leeway, but as someone not well versed in sociological literature, I felt pretty alienated. This isn’t a problem only with the social sciences (I do philosophy which is basically professionalised, self-conscious pedantry) but the issue appears particularly acute in this domain because the responsibility of intellectuals of this variety happens to coincide perfectly with the object of their academic interest. If sociologists speak in a language that is incomprehensible to the rest of the social world and give off the impression that only highly abstract theorising can be instructive as to how to conduct ourselves morally and politically, then something has gone awry.

This isn’t an old problem: Chomsky noted it in 1967, acknowledging that “the claim that there are certain considerations and principles [about the social and political world] too deep for the outsider to comprehend is simply an absurdity”, one that is too readily peddled in the absence of scientific substance. Maybe there are some points of interest that are truly difficult to grasp and require serious, rigorous work. Maybe. But these belong in an academic seminar and unless an indispensable, non-speculative kernel of truth is struck upon that can inform the feminist cause, they should remain there in order to free up space for less dead-end bound debate. From my perspective the kind of convoluted, obscure discussion I’m talking about doesn’t characterise the current wave of feminist enthusiasm – the debates are overwhelmingly clear and grounded in real life problems – but there are traces of it, especially in the conceptual discussions about what feminism is. Where this occurs, it muddies the otherwise crystal waters through which injustices can be perceived. Furthermore, it disengages people with the subject, especially the vast majority who aren’t trained in the technical jargon of the discourse and have a more direct and pure interest in the matters at hand.

It’s not difficult to understand where this all comes from. University departments grow through intellectual inbreeding and there is rarely interdepartmental discussion. What’s more, people like to showboat and that’s all well and fine. It’s worth bearing in mind that a more abstract, technical rendering of feminist discussion isn’t something we should aspire to if we want to promote the cause seriously, since the true responsibility of intellectuals accords more with the actions of Mailer and Chomsky who stepped outside of academic obscurantism to speak clearly and behave (roughly) consistently with the words they spoke.